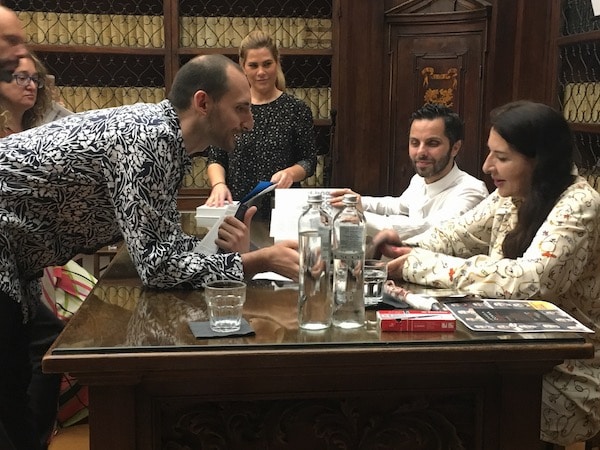 2009 – It all began 9 years ago when Marina Abramović won the “Lorenzo Il Magnifico” Lifetime Achievement Award at the 7th Florence Biennale and presented her Manifesto for the first time at the Fortezza da Basso.

She was intense in her being an artist, in her interpreting and giving meaning to every word. She was sensual; she was magnetic; she was “present”. After a rush of applause and paparazzi flashes that seemed to diminish the value of her Manifesto, it was time to leave, with the frustration of not having met her.

I then continued my tour of the exhibition amidst obscene things and real works of art (some of which I still have leaflets). Suddenly, while I was chatting with my friends, I was in front of her.

Here’s the moment… or now, or never again.
I took courage and went to meet her.

As a 20-something-year-old fool, I went for it, getting rid of the context and the formality of the occasion. From my bag, I proudly took out a copy of L’Uomo Vogue in which Marina Abramović appeared half-naked in a splendid editorial by Francesco Carrozzini, and I asked her to sign it for me.

She laughed, looked at the magazine, raised it, and proudly showed it to all the bystanders -including the Biennale organisers- saying that those photos were like her personal version of Playboy. She  signed those pages, feeling amused, thanking and greeting me.

I had met my art icon. I was over the moon.  Shortly afterwards, I met her again outside the building. I waved at her and seeing that she warmly returned my gesture was a confirmation of her genuineness and sensitivity.

On Twitter, I discover that there is the opportunity to meet Marina individually on the occasion of the book signing of the new volume “Interviews”. After a while, I book a place. It’s an opportunity to meet her again, and I would have bought that book anyway.
Enthusiastic about my choice, while I’m printing the ticket, I think about what I want to say to her, and one thing is sure: – I have to show her again that copy of L’uomo Vogue that’s in my archive.

I show up for the appointment half an hour in advance, but a hundred people already create a long snake that, as a few nights before for the opening, winds up outside Palazzo Strozzi.

Surprisingly, the line runs fast, too fast for me. I’m afraid that the book-signing it’s more like an assembly line where there’s not even time to look at each other’s faces. I know myself, I’ve come this far, on a Sunday morning, I want to meet her, as well as I want her to see my face!

It’s my turn. I kindly ask a girl from the Palazzo Strozzi staff if she can take a picture of me while enjoying this long-awaited moment in person and not through the screen of a smartphone.

I approach the desk, and with a confident tone, I exclaim: – Hi Marina!
She looks up from the “assembly line” of the book-signing, looks at me in the face, and with a big smile says: – Hello!
– I know you don’t recognise me, but we met a long time ago.
– Uh, sorry…unfortunately, I don’t even remember what I ate last night, but it’s possible!
While smiling, I unveil my old magazine and say to her: – Look here!
Her signature in pen stands out on the photo by Carrozzini.

She is astounded, amazed and stunned by the pictures in the editorial.
I tell her what she said to me on that occasion. She felt obliged to sign it again, just below, as if to testify to our second meeting.

Marina can’t stop looking at the photos. She looks at the pages like in a mirror and tells me: – That it’s a crazy thing, it’s a dive into the past. Then she shows the copy to the boy next to her, and we talk, exchanging some jokes.
Contact is made. The book-signing assembly line is broken.
Although on different levels, a connection of memories had been created.

She greets me and says: “This thing is crazy! Thank you very much!”

Dear Marina, thanks to you! You have no idea how much you made me happy, confirming your genuineness again as a person and an artist.

PS: Shortly after, a pseudo-artist – real idiot – threw a frame at her to literally “frame Marina” with all the hatred he had in his body. This makes me understand how sick is the perception of art and artists through the media, especially when it comes to big names.

PPS: Thanks to Palazzo Strozzi’s staff, but especially to the girl who took about 30 photos. I will keep them jealously, both in digital as well as in my memory.