For every fashion show worthy of its name, fashion influencers have one or more rituals to honor: pretend to (not) pose in front of street-style photographers before entering the venue of the show; raise smartphones to film the finale and post it on Instagram just to prove they are attending the event; and for the lucky ones, greet the designer in the backstage with a photo (because asking a question about the show is a too hard task). 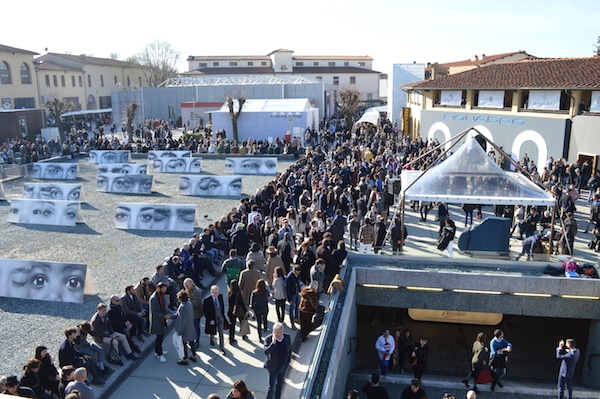 In Florence, during Pitti Uomo, this ritual turns into endless walks in front of the Fortezza da Basso or hours spent while posing on the short wall in front of the central pavilion, pretending not to fracture the coccyx with the little stones stuck into the backsides.

Since the advent of the social media revolution, from season to season, on that uncomfortable short wall we saw the most famous designers, buyers, fashion editors and cool hunter in the world, rigorously dressed up in their whimsical outfits, who contributed to the liberation of men’s fashion from its rigid traditional schemes. In front of the central pavilion the phrase “male elegance” changed its meaning every year and the classic style has been reinvented periodically just by following the evolution of the “Pitti people”.

But seems this mechanism got jammed this year: the peculiarity and the refinement of details gave way to banality and to the desire of being famous by fashion-influencer-wannabes; who, in order to experience the thrill of being photographed on that short wall, depleted completely its symbolic value, not understanding that professional streetstyle photographers do not portray anyone, but only those who say something through their own styles.
It must be said that in the crowd there are many unprepared photographers, but everybody tries to meet the market demand. This is why nowadays you can find horrible streetstyle photogallery in any type of lifestyle website, looking much more like a witch hunt, than a collection of inspirational portraits for designers and trend forecasters.

The streetstyle business became so widespread, that the aesthetic research lost all its value. Rightly, famous photographers now portray those people who guarantee them an economic return; while on the other hand, the novice fashion-influencer-wannabes still think to those genuine photos from 2010-2012, and go to Pitti just for sitting on the short wall, hoping to gain attention and get free clothing.

Apparently a lot of people thought to do the same and never as this year the space in front of the central pavilion became the stage of a mass experience. In the past, only men with wide-brimmed hats, colorful coats and gloves tucked in the breast pockets could stay on the short wall, while this time seemed to be in line at the post office. Anonymous types and normal people got photographed on the short wall just to show their friends (maybe followers?) they were at Pitti Uomo.

Obviously, considering the record attendance of this year (36,000 of which 24,800 buyers) that generated great incomes for the city, and I hope for the exhibitors as well, we have to get over the fact that there wasn’t that sort of diffuse quest for contemporary beauty as in the past. But at the end of the day, better a short wall full of anonymous people who can generate numerous jobs in their companies, rather than alleged gentlemen who shine only for their styles.

It’s also true that in the crowd of dark coats and quilted jackets there were whole new examples of originality such as Francesco Antici, sensitive author of Archilista, who used the Pitti short wall as expedient to show his “Wearable Architecture” collection, gaining critics and support from Italian and foreign press. He wasn’t the first neither the last emerging designer who wore his own clothes on such occasion, but at least in this edition of Pitti Uomo he contributed to give a formative and useful meaning to a symbolic place attended by mere Instagram-addicted hedonists.

3 thoughts on “Pitti Uomo 89: The short wall of the strangers”