Despite the high-tech and futuristic progress of the world we live in, the lack of a specific dictionary for the sense of smell still makes the description of a perfume a very difficult task. Even industry experts use terms refered to other senses like touch and taste, which in turn refer to personal feelings and memories. The motto of Pitti Fragranze 2015, the international exhibition of artistic perfumery held in Florence in September (from 11th to 13th), supported this thesis, in fact, the expression “Olfactory Kaleidoscope” proved that the ‘language of the colors’ is a fundamental part of the perfume codes. Therefore you can easily imagine how hard it was describing in detail and objectively any essence, scent and perfume smelt at the fair; a real challenge made of words and emotions. 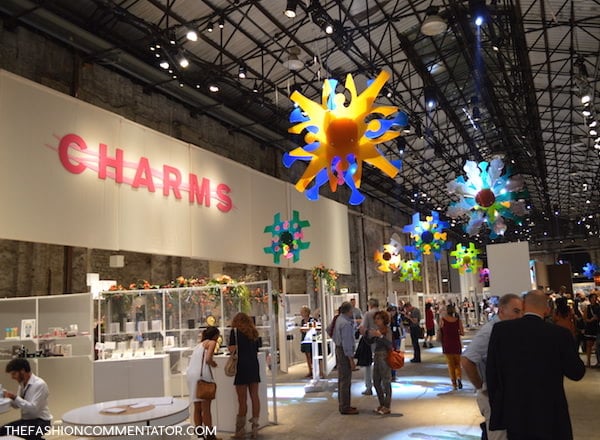 The sensation felt once entered Pitti Fragranze can be compared to the state of trance induced by the bewitching scent of the cosmetics placed at the ground floor of the first department stores in the nineteenth century in Paris. People became happy everytime they entered one of that new palaces dedicated to shopping, because they were overwhelmed by the desire to buy everything that gave pleasure to their senses. With the same euphoria of the past, Pitti Fragranze 2015 takes the visitor into a labyrinth of niche fragrances framed in luxurious sets looking like the windows of an old ‘passage’ in Paris; and the fact that French is the most spoken language in the fair is just the icing on cake.

One of the peculiarities of Pitti Fragranze lies in the staging of each perfume house, aiming to describe and convey the idea that there is behind a scent without letting people to sniff it.

The variety of setups on show is incredible: the outfittings with flowers are an ever-green, as well as the abundant use of gold or black (better if combined) that give a sense of allure and exclusivity; in some cases perfume houses turn to the daily rituals of beauty; the over use of the minimal style risks to sicken for its monotony, but honestly even the affectation of the Rococò style with butterflies, columns, lace and various statues is not far behind!

Aside from the charm of the kaleidoscopic pendants hanging from the ceiling of the Stazione Leopolda that pay homage to the main theme of this edition, the more interesting (and successful) setup of Pitti Fragranze 2015 was the installation “ART OBJECTS. Shape, color, scent” curated by Chandler Burr. The American journalist (fragrances expert and perfume critic for the New York Times) proposed in some strategic points of the show, an unusual combination of visual arts and perfumes, comparing 15 olfactory artworks with 15 masterpieces of painting, sculpture, photography and architecture. During the talk-presentation of the project with the art curator Francesco Bonami, Burr explained how he was amused to combine fragrances to certain works of art by considering not only the colors, but also the techniques and the inspiring principles of each artistic movement.

According to his personal belief, in fact, Perfume like Aesthetics, is a form of Communication; so as well as the artists work both on the technical side and in terms of communication, also the noses who create a new perfume act both on its structure, and on the feelings that it should convey.

Among the most curious selections, I was impressed by the combination of the hyperrealism art movement and the scent ‘Pulp‘ made by Jérome Epinette; Burr said that its extremely fruity and sweet essence could also be attributed to the potential aroma of the flowers by Takashi Murakami for Louis Vuitton. What an amazing suggestion to ‘visualize’ a fragrance, isn’t it?!

Among the other special projects on show, impossible not to mention the magical world of ‘UNSCENT LAND, Fragments of the Emerging Olfactory scenes‘, the experimental platform conceived and curated by Celso Fadelli and Cristiano Seganfreddo, which aims to raise awareness of the experimental scents made by international noses. The ‘Spazio Alcatraz’ hosted a sort of theatrical stage that looked like a mix of a contemporary art gallery and a circus, in a game of references and memories, including carousel, horses, videos and fabric panels with artistic representations inspired by the brands involved in the selection.


In conclusion, the selection of Pitti Fragranze 2015 contributed once again to raise awareness of the unexplored horizons in perfumery, proving that a lot of things haven’t already been made, indeed, the future and the evolution of this artistic field will be possible only with a mixture of cultural influences for which the knowledge of the past is essential. As in every creative field.