For the Expo 2015, Florence invites you to a special dinner in its museums, and also a wedding!
No joke, this is the theme of the latest exhibition at the Galleria Palatina of Palazzo Pitti that propose the sumptuous wedding feast of Maria de ‘Medici and Henry IV of France, so far from the convivial scenes painted by Gherardo delle Notti, now on display at the Uffizi Gallery. 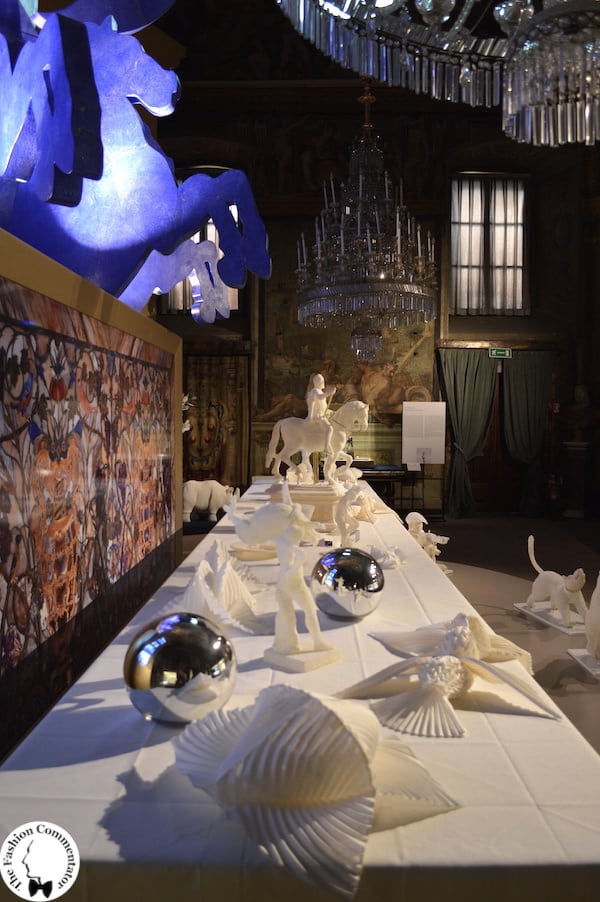 “Dolci trionfi e finissime piegature” is the exhibition with which the Galleria Palatina of Palazzo Pitti in Florence celebrates the theme of Expo 2015 linking the contemporary debate on food, to the visual pleasures of the table for the wedding of Maria de ‘Medici and Henry IV of France, held on October 5th, 1600.

The Marriage of Maria de’ Medici and Henry IV of France

The complete description of that historic event was curated by Michelangelo Buonarroti the Younger with a particular attention to the ephemeral installations designed by Bernardo Buontalenti for the king’s table and the huge French lily-shaped cupboard rest on the rampant horses by Giambologna, created by Jacopo Ligozzi in order to display the two thousand most important pieces of the Medici’s treasure.

The complete description of that historic event was curated by Michelangelo Buonarroti the Younger with a particular attention to the ephemeral installations designed by Bernardo Buontalenti for the king’s table and the huge French lily-shaped cupboard rest on the rampant horses by Giambologna, created by Jacopo Ligozzi in order to display the two thousand most important pieces of the Medici’s treasure.
Unfortunately, there weren’t sketches attached to the Description by Buonarroti, so the exhibition’s curators, Giovanna Giusti and Riccardo Spinelli, decided to recreate the theatrical effect of the king’s table with the collaboration of the Academy of Fine Arts of Florence, in particular the Set Design MA courses directed by Prof. Giovanna Fezzi Borella and Prof. Claudio Rocca.

For the laymen this might seem only the revival of a dinner like many others, but there are two elements that made the banquet of October 5th, 1600 the most extraordinary event of the time:
the sugar sculptures, conceived as true works of art for the table worked on models of great artists like Giambologna, Pietro Tacca and Gasparo Mola;
and the pleated linen napkins modeled as animals, characters or even life-size trees.

The sculptures in sugar, in addition to the equestrian centerpiece of King Henry IV, depicted classic themes such as the Labours of Hercules, the Greek Gods, but also pastoral and hunting scenes which aroused the admiration of the queen, highlighting the genius of the Florentine craftsmen in such an important political-diplomatic occasion for the Medici family.
The most interesting aspect of the revival came out during the press conference, when Sarah Del Giudice, with the typical pride of the Tuscan artisans, spoke about the exciting rediscovery of the ancient process for making the sugar statues in her historic family foundry.

Later, spoke also the Catalan master Joan Sallas, author of all the pleated linen works in the exhibition, who explained how the “pleating art” was actually born in Europe, long time before the Japanese origami.
Although it was already in use in the Middle Ages, the development and the decoding of the craft techniques of pleating the starched linen is due to Florence, and the famous banquet of Maria de ‘Medici and Henry IV of France was the best example of this art.
In addition to sugar sculptures and reflective spheres on which the guests enjoyed themselves by seeing their distorted faces, on the table there were willing birds, flowers, wild animals such as rhinos and rampant lions, but also human figures as the two soldiers placed at the foot of the table, with the lozenge pleated tablecloth as backdrop.

This opulent and dreamy scenario of the Palazzo is definitely in contrast with the lowly commoners dinners portrayed by Gerrit van Honthorst (1592-1656), now on display at the Uffizi Gallery in the first major retrospective devoted to the Dutch artist, known by the pseudonym of Gherardo delle Notti for his feature of painting dark scenes in the candle light.
The exhibition retraces the entire life of van Honthorst through forty paintings selected by Gianni Papi and Antonio Natali, mainly focusing on the Italian period, when he interpreted the revolution made by Caravaggio in a so personal way, that caught the attention of prestigious collectors such as Cosimo II.
Thanks to the Grand Duke of Tuscany, the Uffizi Gallery owns the three famous convivial scenes (Dinner with nuptials, Fortune Teller, Dinner with lute player) where musicians, prostitutes, gypsies, fortune tellers and drinkers enliven the tables with recurrent episodes of Roman taverns, diametrically opposed to the lavish banquets of the Medici family.

In both these exhibitions we can see two different ways to enjoy the pleasures of the table, which are part of the Italian DNA and today, after 500 years, have become the topic of the Expo 2015.