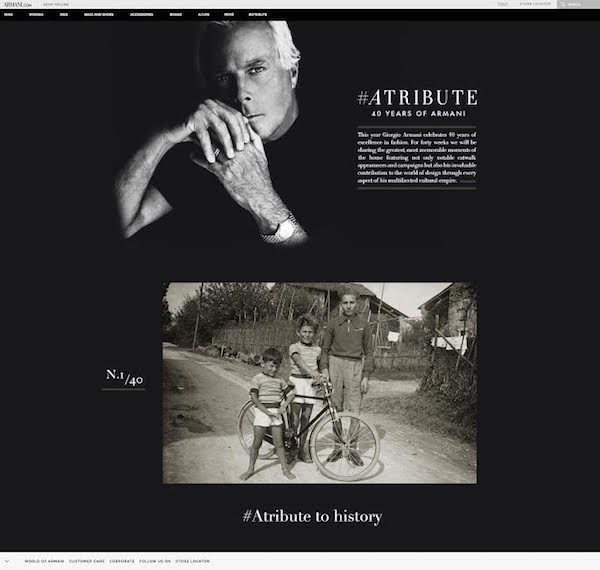 Giorgio Armani today officially launched armani.com/atribute, the website that celebrates the 40th anniversary of the brand, in anticipation of the opening of the Armani Silos, the huge museum of the King of Italian fashion.

In 2015 Giorgio Armani celebrates four decades of activity using the speed of the internet, sharing contents and themes related to the Armani world through the #Atribute digital project.

Every week, for 40 weeks, will be published special contents concerning the evolution of style according to Mr. Giorgio Armani, that will also be shared on social networks to create a direct dialogue with the public via the #Atribute hashtag.

A big launch that after the pioneering project of the Valentino Garavani Virtual Museum (2011) and the latest digital archives Vogue Archivio and Prada Universe, finally makes accessible the story of Giorgio Armani, a fundamental part of Italian fashion universally recognized as a contemporary classic.

To laymen the Armani website can seem just a drop in the internet ocean, but actually it’s a great headway for the diffusion of the fashion culture on the web.