Finally, after too many seasons, I had the chance to begin my fashion tour with one of the fashion designers I appreciate the most for his industriousness, pragmatism and creativity. His unique style is the result of a perennial and personal research that non only involves the love for women, but also for art, photography, cinema and, above all, the textile research. 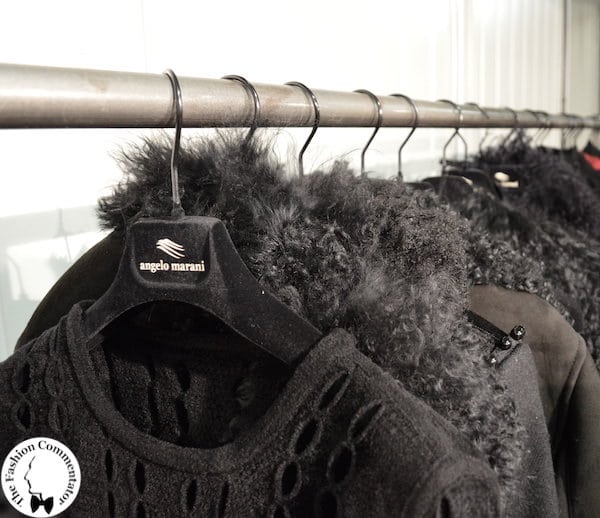 Angelo Marani, as an outsider of the Milan Fashion Week, avoids the androgynous trend and the cover-girl aesthetic ideals, dedicating his research to the most beautiful and sensual parts of the women’s body: the curves.

The inspiration of the collection comes from a cinema club poster with a series of movies themed on the divas’ curves. Eternal icons as Liz, Gina, Sophia and Marilyn not only are a source of inspiration, but they also become part of the outfits because their pictures printed on silk are framed into padded structures which model and highlight the curvy silhouette of the female body. Looking at the mood-board in the backstage, is clear that the visual research doesn’t stop to the old movie stars, but comes closer to our days passing by the photos of Helmut Newton and the sexy-selfie of Kim Kardashian, surely one of the best-known women who is deeply in love with her own body.

Despite the dark palette, in the collection we can see all the hallmarks of Marani’s style such as the graphic and tactile contrasts, and the huge material research. There are new makings and materials such as the elastex astrakhan made of fil coupé wool set on a base of jersey, the knitted inlays on lace dresses or the tech-velvet coats; but also very old fabrics like the “orbace”, an historic cloth used during the Fascist period for the winter jackets of the party members. Marani re-discovered it, claiming its 100% Italian production taking as example a Sardinian craftsman who produces 20 meters per day.

Angelo Marani enhances the true femininity in all its shades, but there is no Mr.Gray to please here, indeed, as the designer says backstage: women must seduce themselves first.