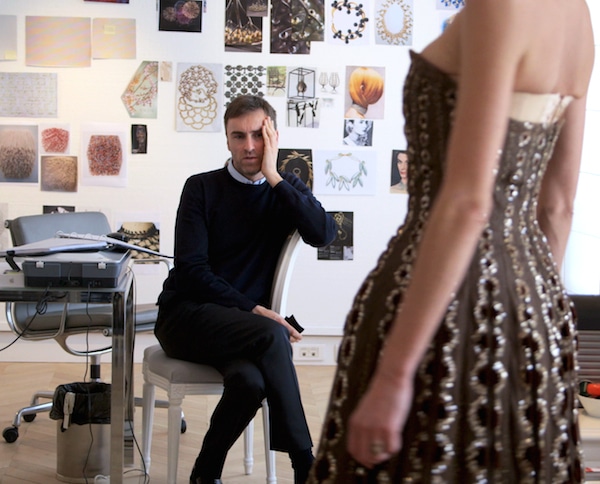 After the success of the film “The Last Emperor”, in which Matt Tyrnauer celebrated the withdrawal from the catwalks of Mr. Valentino Garavani in 2008, the fashion documentary has become a trendy movie genre worldwide, thanks to which also lay people can access the secrets of the most famous fashion designers. The long list of “filmed designers” includes Karl Lagerfeld, Yohji Yamamoto, Yves Saint Laurent, Donatella Versace and Frida Giannini, and from today we can add also Raf Simons thanks to Frédéric Tcheng‘s film “Dior and I“, which I had the pleasure to see at the Italian premiere during the 55th edition of the Festival dei Popoli in Florence.

The documentary begins with a comparison between Christian Dior and Raf Simons. The archival footages that announce the arrival of the father of the New Look on the Parisian fashion scene, are intertwined with the arrival of the new Dior’s creative director in 2012: a bashful fashion designer nicknamed by the press as “minimalist” and who has to make his first ever haute couture collection in just 8 weeks. It’s an hard challenge and throughout the film you can feel the unstoppable flow of time, accompanied by an heavy anguish sense, caught by the film director in the looks between Simons and his collaborators.

The initial misunderstandings between the artistic director and the atelier’s staff, become a lesson on the difference of haute couture and ready to wear rhythms. In couture every single thing is made by hand with hours of hard work and if an American customer who makes orders for € 350,000 per year, requires for some alterations to her dresses, the chief seamstress (première) must board on the first available flight to the US, even if the creative director wants her with him during the first fitting of the new collection. He can getting furious and nervous, but the chief seamstress won’t be there because in couture the customer has priority over everything.

In the movie we can see also Pieter Mulier, the historic right arm of Raf Simons who mediates between him and the true stars of the atelier: Monique Bailly, première of the atelier tailleur (head seamstress for suits) and Florence Chehet, premiere of the atelier flou (chief seamstress for dresses). They are two simple and humble persons, but also incomparable professionals who lead an international staff of experienced workers, some of which have been making by hand every single detail of Dior’s collections for more than 40 years (the age of Simons).

In addition to the amusing “behind the scenes” anecdotes of the House of Dior, the most fascinating thing that comes out from the documentary is discovering the entire creative process of the first couture collection by Raf Simons. Everything begins from the archive: a model wears some key pieces, while Simons tries to understand the shapes, the proportions, the structures, the language and the colors used by Mr. Christian Dior and how to insert his own new vision. It’s a difficult task, especially because Simons himself notices how contemporary are most of the clothes from the 50s. But dress after dress, there it is: a brown strapless dress with pseudo-optical circles patterns studded with glittering applications that Simons re-thinks and re-models as a colorful top matching elegant long black pants. That’s exactly the unexpected Simon’s contemporary twist!

The moment that fully reveals the great artistic sensibility of Simons is when after his daily rounds among the latest art exhibitions in Paris, he decides to propose a series of spray artworks by Sterling Ruby on evening dresses, forcing the print-designs staff to rediscover an old and expensive technique called imprimé chaîne, for which each thread of the fabric is printed before being woven. Although the idea comes from a floral printed fabric sample of the archive, this weird “impossible desire” spread the panic in the atelier, but the new direction of haute couture by Simons is made of research and experimentation, and as he says to the staff: until the model doesn’t go on the catwalk, everything is possible.

Thanks to the imaginary dialogue between the founder of the fashion house and the new creative director, the director Frédéric Tcheng goes beyond the simple documentary film, making a very unique portrait of Simons. He’s an experimental artist totally addicted to work, whose professionalism contrasts with the great sensitivity revealed by the terror of appearing in front of the cameras or of taking bow at the end of the show. Fortunately the adrenaline of the moment had the best on his fear and after walking the entire runway under a rain of applauses, he also poses for the photos with all the Dior celebrities, but his emotional side comes out again when he proudly tells the photographers that the elegant couple who he is embracing in front of the photo-wall are his parents.