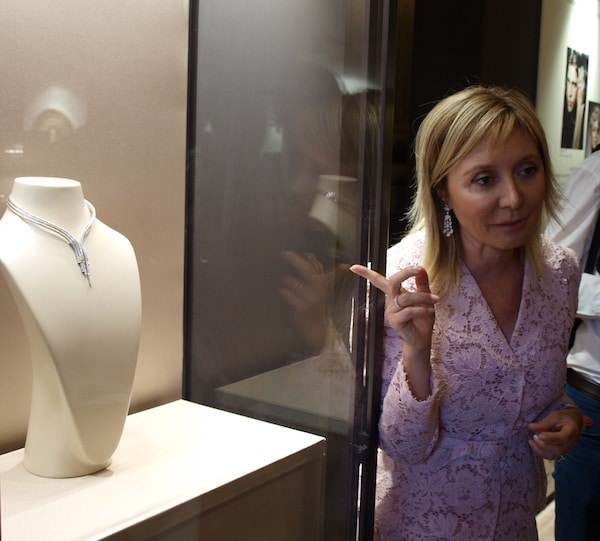 “The three stripes of diamonds that make up the necklace, symbolize ours family dedication to work. Once closed the necklace, the Damiani Chakra get together, reassembling the main circle as in the Oriental philosophy that inspired the jewel.”

With these few words Silvia Damiani, Vice-chairman of Damiani SpA, describes the jewel which won the Diamonds Trading Company – Power of Love Award in 2003, and that she officially donated to the Museo degli Argenti of Florence to celebrate the closing of the exhibition “Damiani, 90 Years of Excellence and Passion” held form June to September in Palazzo Pitti.

During the formalization of the donation, Silvia Damiani said to be sad for the conclusion of the exhibition, but at the same time she was happy and honored to give a piece of Damiani’s history to Florence, and maybe they could come back in ten years to celebrate the centenary.

As repeatedly stated in the press conference by the Superintendent of the Polo Museale di Firenze, Cristina Acidini, and the Director of the Museo degli Argenti, Maria Sframeli, this donation from a private party, shows how the Florentine museums are not just archaic realities closed to the contemporary, but rather thanks to excellent companies such as Damiani, the Contemporary Jewellery collection can continue to grow. The jewel of the donation is the beautiful “Chakra” necklace, a Damiani masterpiece in white gold and diamonds (worth 35,000€) worn by stars and celebrities on several red carpets around the world, as flag of the Damiani values.

The 90th anniversary exhibition celebrated the history of Damiani, the Italian jewellery brand born in Valenza in 1924, when the founder Enrico Grassi Damiani began designing and manufacturing diamond jewelry for the noble families of the era. In 90 years of activity the family business has grown from generation to generation: the first technical innovations were made ​​in the 50s by Damiano, the son of Enrico; then in 1976 his wife Gabriella, won the first Diamonds International Awards (the Oscars of the Jewelry) with “Shark”, the platinum and yellow gold bracelet resembling the shape of a shark jaws, illuminated by pavé diamonds and jonquille for a total of 41.19 carats; the 80s are the years of the communication revolution associating for the first time the image of the jewels with the main movie stars of the time. Since 1996, it is the turn of Guido, Silvia and Giorgio, the sons of Damiano and Gabriella, who take over the reins of the company, launching the opening of the first mono-brand stores and the worldwide expansion of the brand.

In the exhibition at Palazzo Pitti, alongside the 18 winning jewels of the Diamonds International Award, the Oscars of the Jewelry, there were masterpieces like the Peacock necklace or the Burlesque bracelet, and a limited edition that celebrates the 90th anniversary with 10 new Damiani jewelas replicated in 9 numbered copies each, that pay homage to all the decades of activity of the brand, reinterpreting the style of the single decades.

Each of the jewels on display has its own history, its own shape, its own personality, but they are equally the result of the passion of three generations, and just like the three diamond rows of the Chakra necklace, they come together in a only piece, the Damiani family.