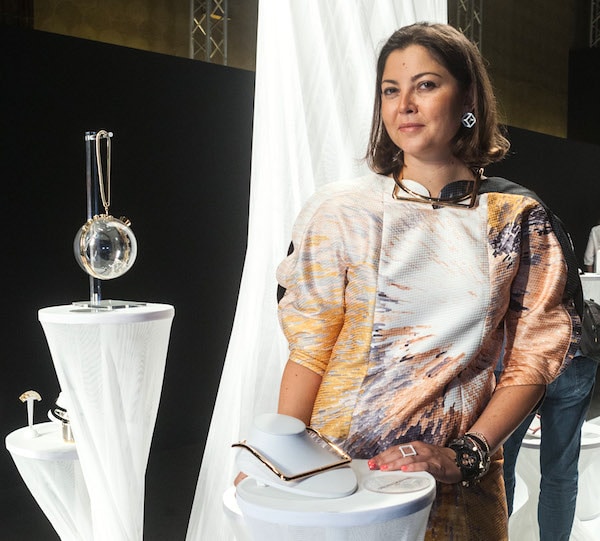 Alessandro: – I really like the dress of that woman over there, it reminds me of a Balla’s painting and the jewelry she is wearing are the pure essence of what I personally consider “design jewelry”. Who is she? Can you recognize her?
Alessia: – I don’t know, I don’t remember, but the dress seems to be a Fendi!

With this fleeting comment between colleagues (note: me and Electromode), I came in touch for the first time with the creations of Caterina Zangrando, one of the 4 accessory designers selected by Vogue Italia for the Who Is On Next?2014 contest, whose award ceremony took place in Rome during AltaRoma.

Actually, reconnecting fashion periods and trends, I think that the real first time I saw Caterina’s jewels was a very long time ago. Do you remember when in the middle of the 2000s fashionable people began wearing pearl necklaces with pendants of cartoon characters which many designers reinterpreted also as charm for bags and key chains?

Well, that trend started from a necklace by Caterina Zangrando, who made it for fun in 2004 and which the editor at large of American Vogue, Andre Leon Talley, noted during a chance encounter. After his praises, that mix of satin ribbons, pearls (removed by an ex-boyfriend’s gift) and the cascade of Disney puppets became the first piece of Caterina’s jewelry line, which led her to collaborate with fashion houses such as Ferragamo and Swarovsky.

Unfortunately, as you may know, Fashion honors you so fast as goes back on you, so after a difficult period Caterina decided to move to Paris and in 2013 launched her new jewelry line, with a totally different style from the previous one. There are no more Disney puppets downplaying the lady-like mood of the pearls: now the lines are geometric and sharped, her creations are architectural volumes intersected with high jewellery.
The eye-catching shapes reach minimalist perfection in the tubular squared necklaces and the ultra-thin bracelets, but the playful soul of Caterina has not entirely disappeared, it is only disguised in more daring experiments as the transparent spherical minaudière, whose lock reminds of a precious tiara of a Russian princess, creating a sort of conceptual oxymoron and not only a simple contrast between opulence and minimalism.
Despite Caterina Zangrando didn’t win Who is on Next? contest, I think her career (begun with a Public Relations degree, a job at Valentino’s press office and then evolved into jewelry designer) is the true demonstration that next generatios have to be versatile, but especially passionate and determined to achieve dreams, even if they have nothing to do with the path taken at the beginning.
Sooner or later, those who have passion will succeed!
Alessandro Masetti – The Fashion Commentator