“Why are you going to AltaRoma?! Rome is dead!”

This is what I was told each time I announced my arrival in Rome for the couture week (alta moda).
I confess that at first I had some doubts in doing so. The cost of trains, taxi and accommodation were such a deterrent to me because I can’t boast the title of “specialist correspondent” for a famous magazine (with expensive benefits and refunds), but the passion for what I think will be my future work field, the curiosity for the celebrations of the 10th anniversary of Who is On Next? contest and the joyful opportunity to see the fashion shows of the fashion designers I have supported over the years until they become established brands, fortunately prevailed, and I’ve never been so happy (and satisfied) to attend a fashion week. 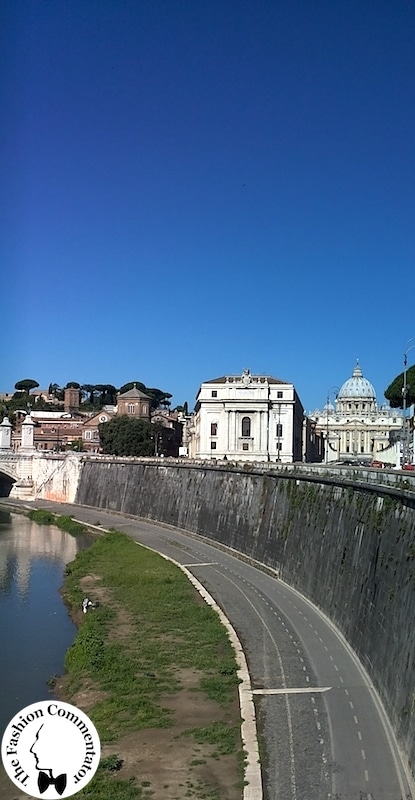 So as Pitti Immagine in Florence, even AltaRoma in Rome can be considered a parallel universe if you compare it to the international fashion weeks. In Milan, London, Paris and New York the fashion show timetables follow a so fast pace in which the delay may not exceed the 30 minutes, otherwise journalists get away or write negative reviews (Despite the purchase of advertising space on magazines and newspapers, the human factor has still a large weight in the reviews of the fashion shows); in Rome instead, everything is more quiet because the shows are held in the same place, so it is easier to follow them without getting stuck in the traffic.
Now that I’ve experienced first hand how it performs the whole thing, I can say that AltaRoma is unique and I think it mainly depends on three factors:
1 – MIX OF STYLES
The varied range of collections and designers I think is the key for the success of this couture week.
Alongside the high-sounding names of the historic Roman haute couture tradition such as Raffaella Curiel and Renato Balestra, there are new couturier generations as Sabrina Persechino or Giada Curti who make a total different work from the old masters.
Speaking of which, I would like to tell something about the aforementioned “old school”. I had the opportunity to touch a cloak studded with applications by Raffaella Curiel in the backstage just after the fashion show and as I watched the seams construction and the sparkle of the crystals I thought that many people should rinse their mouths with acid before criticize an historical brand like this just because it doesn’t follow the contemporary market diktat (for foreigners readers, you have to know that in Italy the Roman alta moda is considered out of fashion). Is it so difficult to understand that these handcrafted masterpieces are exclusively made for a select trustworthy clientele who doesn’t have any interest in contemporary fashion trends? In Rome there is no need of contemporary fashion research, neither of red carpet looks, but only the desire of wearing a dress made according to the traditional tailoring and the finest craftsmanship technique. Nostalgic? Too old style? Maybe so; but it is a type of fashion characterized by the unmatched quality of details, and having the opportunity to attend the most celebratory and self-referential moment for the brand, such as the fashion show, is one of the most fascinating things that can happen to you at AltaRoma!
Those who aren’t interested in couture, may attend several ready-to-wear fashion shows of designers often coming from the Vogue Who is on Next? contest, or even African designers thanks to the ITC Ethical Fashion project which point the spotlight on selected brands that employ entire communities valuing local fabrics and workmanship. Finally, the last day is devoted to the collections of fashion students coming from the institutes of Rome. In addition to all these institutional events, there are many others presentations or cocktail parties scattered throughout the city. 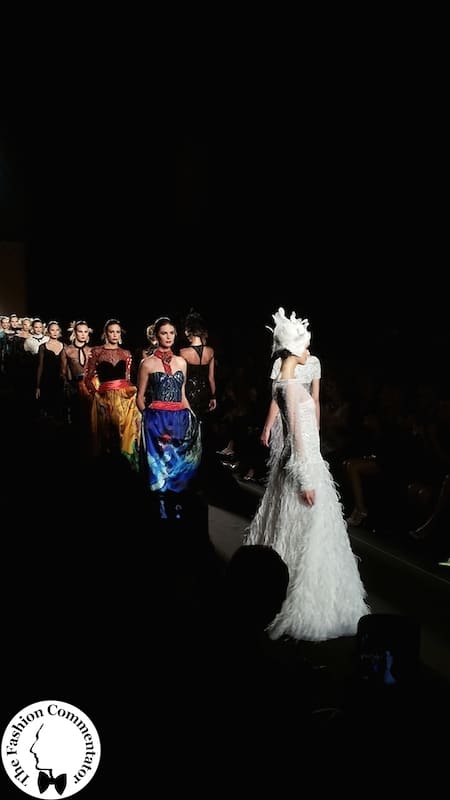 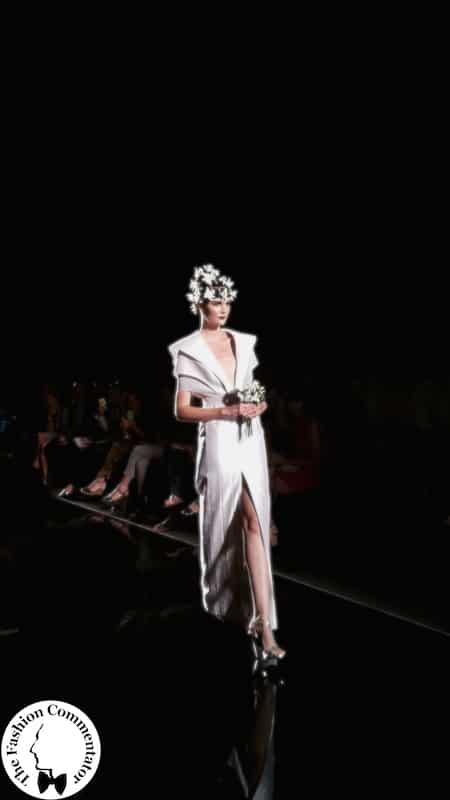 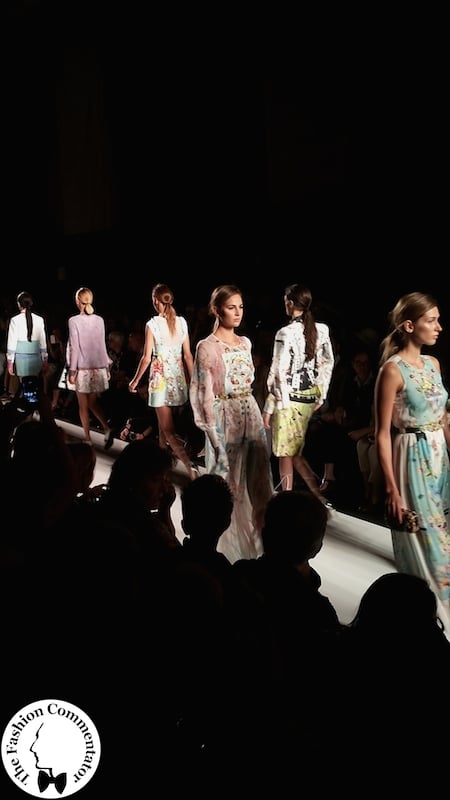 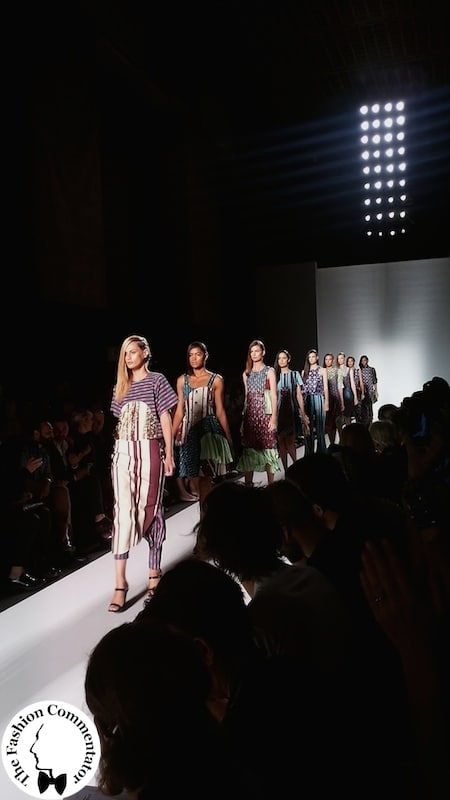 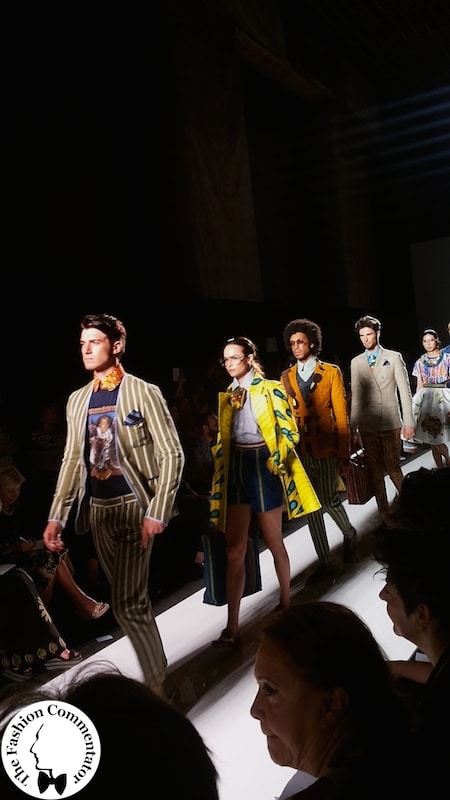 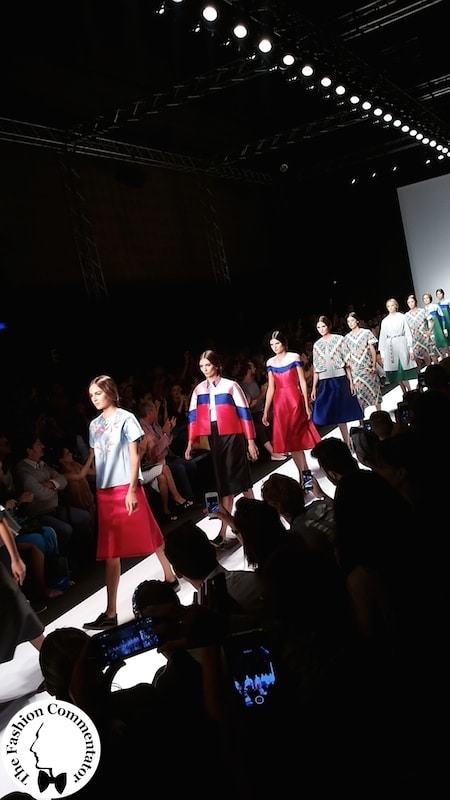 AltaRoma 2014 – Stella Jean, San Andrés Milano
2 – LOCATION
Another factor that makes AltaRoma a unique event, especially in the eyes of an architect, is the suggestiveness of the locations where the events are hosted.
The AltaRoma headquarters are in the complex of Santo Spirito in Sassia, with two large frescoed halls hosting the fashion shows and the quiet cloister, for which silence does not seem to be in Rome.
The other event locations change from edition to edition and personally I visited the atelier of Renato Balestra in an elegant building of the late nineteenth century; the Gardens of Sallust, with the splendid pavilion of the Roman period (!!!) that after so many centuries still dominates the square; and finally the sumptuous Palazzo Braschi, with its very unusual wood and ceramic floors decorated with Moorish themes.
Obviously, even in Florence and Milan fashion shows and events take place in dreamy location, but being inside an archeological site has no equal. 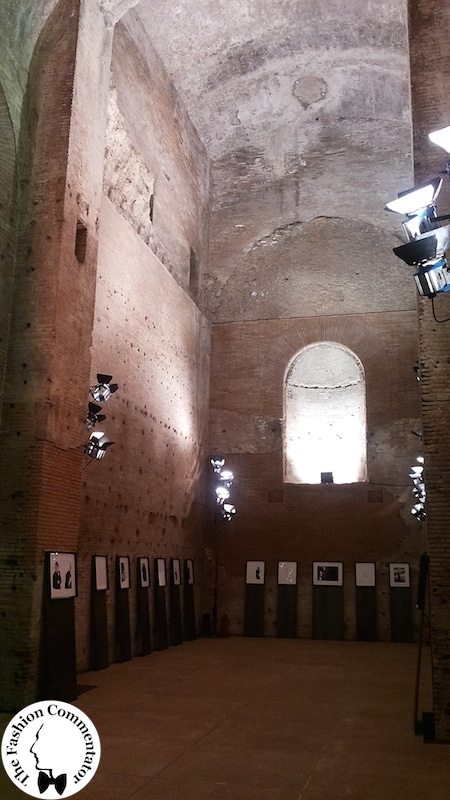 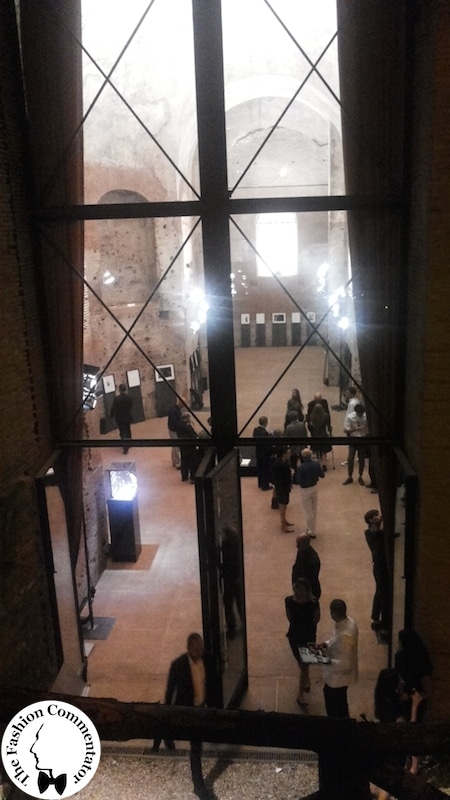 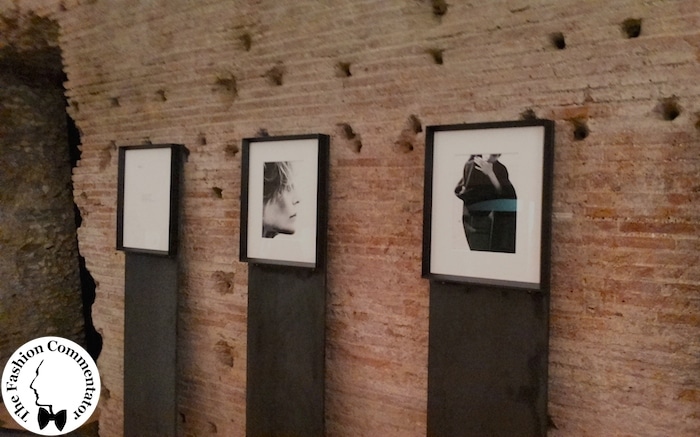 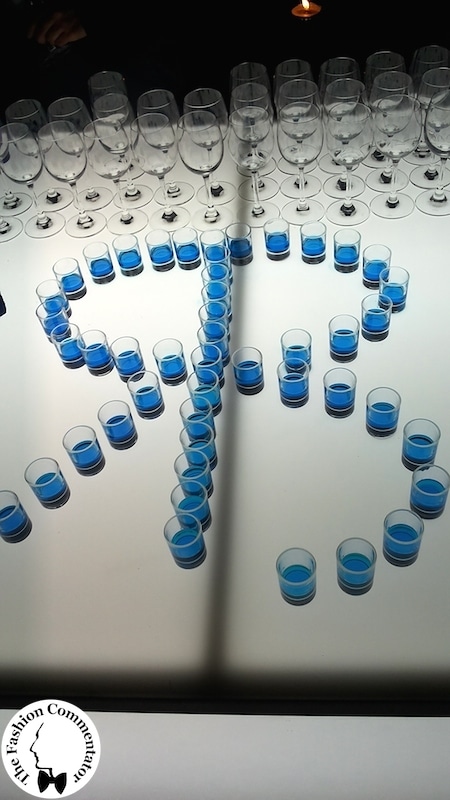 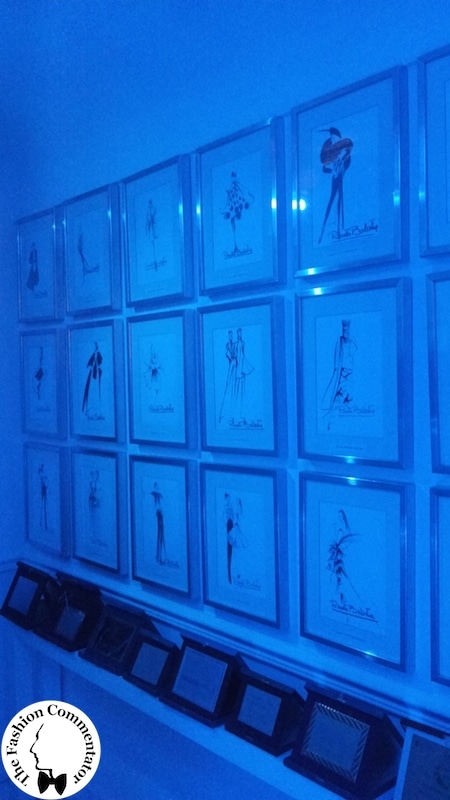 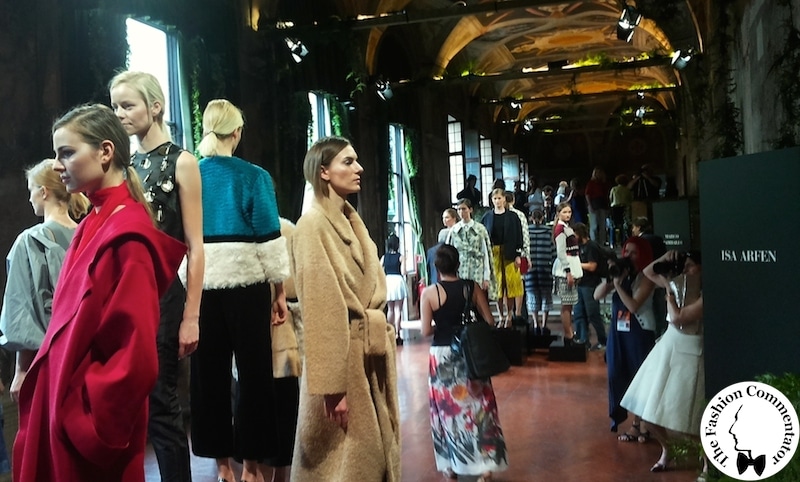 AltaRoma 2014 – View on Talents near the Vatican 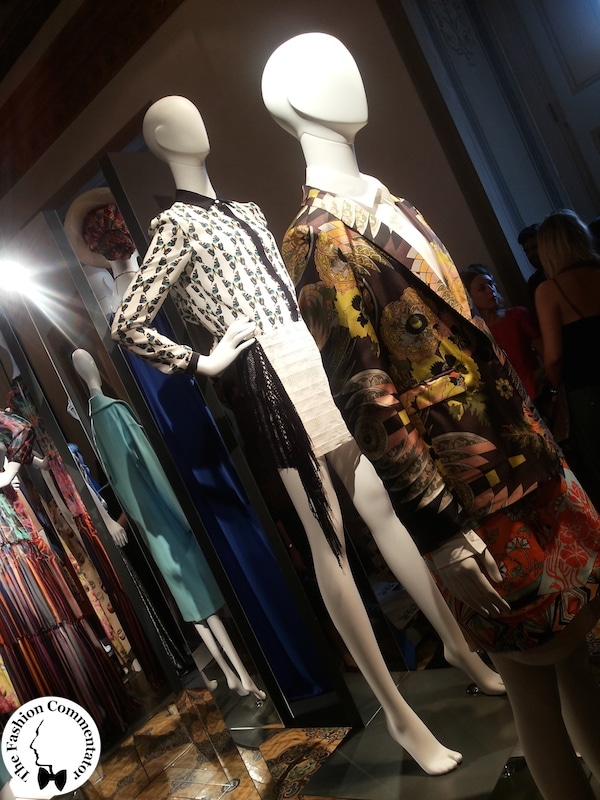 AltaRoma2014 – WhoIsOnNext?2014 exhibition for the 10th anniversary of the contest
3 – RELAX
An independent factor from the organization of AltaRoma, but that contributes to the full enjoyment of the event is the relaxing atmosphere that you can breathe in Rome.
The times, both for the Roman lifestyle and the summer season, are relaxed and everybody is perpetually late, but this matter of fact doesn’t assume a negative value: it is a very common practice attending an event at least one hour and a half after the time indicated on the invitation.
Even the accreditation (check lists of seating assignments) that usually is the most traumatic moment of a fashion show for a journalist, in Rome it flows in a flash, without long queue and hysteria scenes (very common in Milan). In order to this, given the smaller presence of press than the other international fashion weeks, you can often find your seat near important people like Franca Sozzani, Silvia Venturini Fendi, Suzy Menkes, Diane Pernet, Beppe Modenese and many others.
You can object that they are always the same people that you can see in Milan!
Yes, it’s true! But at least in Rome they aren’t overwhelmed by freaks prancing to be photographed by some streetstyle photographer. 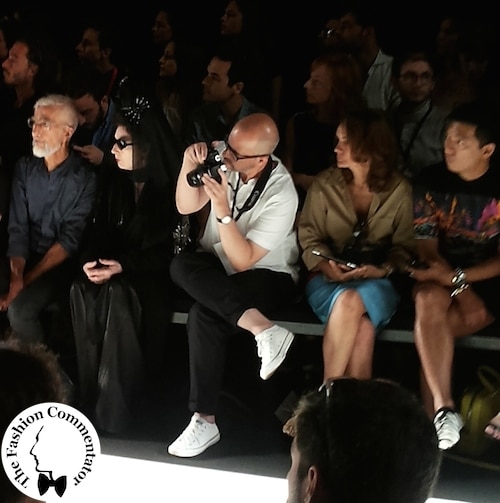 AltaRoma 2014 – Diane Pernet with her photographer and Bryanboy
in the front row of WhoIsOnNext?2014 fashion show
Like it or not, in Rome there is no street-style and the Milanese-fashion-crowd knows it well, so if they attend AltaRoma, they wear only minimal casual clothes, without flaunting some social status through any garment-oddities.
Due to this sense of relaxation, which inevitably bring people to not set up crazy outfits, my friend and colleague Riccardo says that AltaRomamiss the glamour.
Honestly, I would rather say that in Rome there is a different kind of glamour: it is a sober elegance made of small details, in deep contrast with the other events.
Alessandro Masetti – The Fashion Commentator

3 thoughts on “(Alta)Roma is unique!”