Skip to content
From February 1st to June 15th, the Textile Museum of Prato hosts “La camicia bianca secondo me Gianfranco Ferré” an extraordinary monographic exhibition with 27 iconic white shirts made by the fashion designer Gianfranco Ferré from 1982 until 2006, selected by the curator Daniela Degl’Innocenti and the director of the Fondazione Gianfranco Ferré, Rita Airaghi.
With only 27 pieces coming from the Gianfranco Ferré Foundation, the visitor is catapulted in the city of Milan between the 80s and 90s, when the Armani-Ferré-Trussardi-Versace quartet launched on the catwalks the vanguards of the Italian style, which still today are a source of inspiration for designers all over the world.
Each white shirt (but please do not call them just shirts!) Is the materialization of the creative process that the architect and fashion designer Ferré conceived as an architectural project, passing from the initial sketches, to the composition of the volumes, then to the study of details and the styling for the catwalk presentation.
Pleats, ruffles, belts, corsets, leather bracelets, lace, precious buttons and decorative applications are part of the poetic of Ferré, who over the time enriched the first minimalist silk structures making more and more complicated white shirts, almost like the evolution of architectural styles ranging from the simple and balanced harmony of the Renaissance, to the excesses of Baroque and Rococo, until the return of the balance with Neoclassicism. This development of shapes and styles identifies Gianfranco Ferré as a “designer of architectural items to wear“, whose constructive nature is revealed through sketches, editorials and the striking photographs by Leonardo Salvini that simulate the x-ray technique highlighting the structure of each garment. 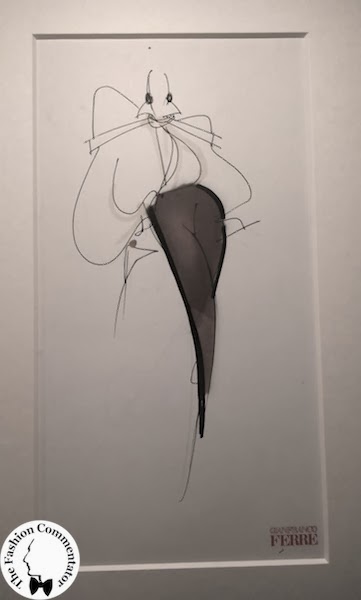 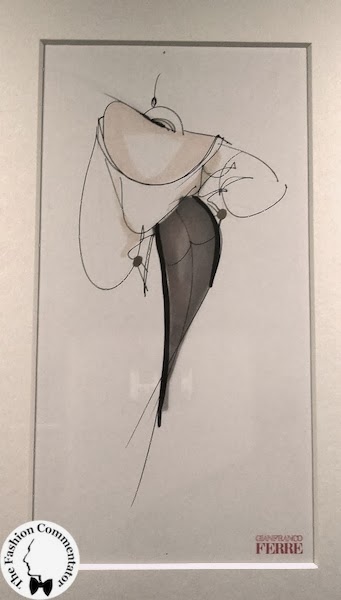 Gianfranco Ferré – Autumn Winter 1989 – sketches
The exhibition catalog published by Skira is curated by Rita Airaghi under the artistic direction of Luca Stoppini (historical art director of Vogue Italy) who, as he said during the press conference, wanted to photograph and transform Ferré’s shirts in his own dream, according to his own vision and contemporary sensibility even if “It was an easy game to play because the work of Gianfranco is still fashionable and a great inspiration.”
The Textile Museum of Prato with this exhibition confirm his important role among the best Italian realities dedicated to the fashion culture, mainly due to the sensitivity of the curators towards a protagonist who contributed to the primacy of Italy in the fashion world; unlike the city of Milan, venue of the most representative institutions of Italian fashion, that after seven years from Ferre’s death didn’t do anything yet to remember and celebrate his genius.
Info: Museo del Tessuto di Prato
Alessandro Masetti – The Fashion Commentator