Skip to content
In the last few days all the fashion media mourn the end of the 16-year liaison between Louis Vuitton and Marc Jacobs, whose role as creative director could be given soon to Nicolas Ghesquière, who in turn was forced to leave the same position at Balenciaga one year ago.
As usual, the “betting game for the new creative director” has already begun: someone talks about a migration of Raf Simons to Vuitton, leaving his place at Dior to Ghesquière; some others talk about a transfer of Phoebe Philo, who in recent years has launched Celine among the top cutting-edge brand of LVMH. This funny-but-worrying betting game reminds us how the role of creative director is a tough but unstable conquest, depending on the will of the CEO. 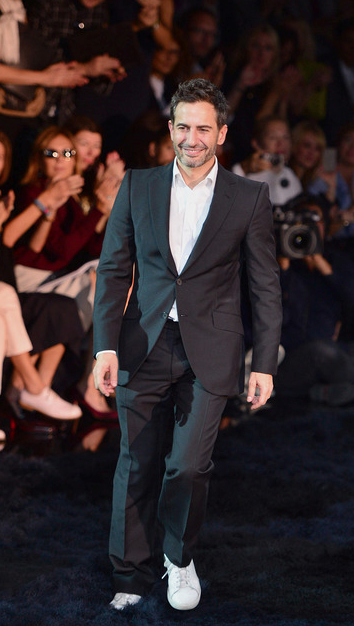 According to the after-show interviews seems that Marc Jacobs is very happy, despite the tense climate around the notification of the non-renewal of his contract at LV. Finally he will be able to focus all the energy to his own brands which parade during NewYork Fashion Week. It is not a mystery that usually the main themes performed on the catwalk at the beginning of September for the Marc Jacobs and Marc by Marc Jacobs collections, were always “re-made” in a more luxurious way for Louis Vuitton show, just three weeks later at the closure of the Paris Fashion Week.
Despite that I’ve never been a supporter of Marc Jacobs’ excesses for Louis Vuitton, I can’t deny he has been able to re-launch the brand in the luxury stardom with an impressive style evolution.
Comparing the rare images of the first show (March 1998) and the details of the last collection (SS 2014), you can truly feel this slow change, although he always remained true to some key elements and symbols replicated in all the collections.
From the first minimal collections, he gradually changed the LV style going through an high level of sensuality with deep necklines dresses, mini skirts, shorts and naked shoulders: all elements which contribute to make up a sexy-girly mood in which the 50s meets punk and military uniforms. The initial oversized silhouettes become tight at the waist resembling the Japanese kimonos, and then he also added floral and geometric printed patterns to give a more feminine attitude to the collections. 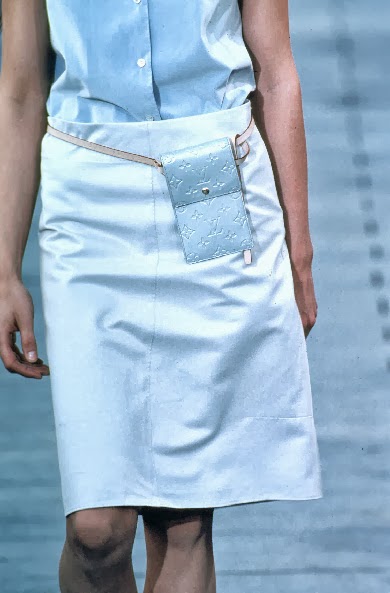 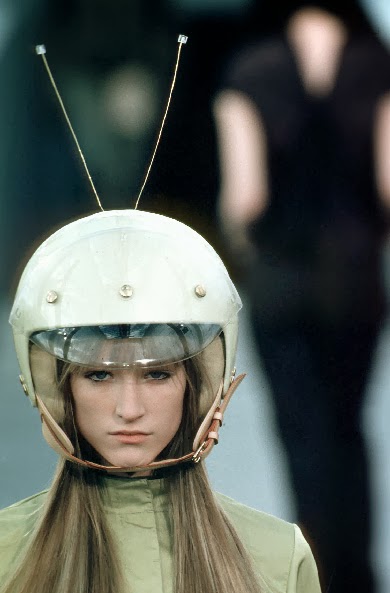 Louis Vuitton by Marc Jacobs SS 1999
By the early 2000s, thanks to the widespread of the folk trend, Marc began to use more colors declining them on silks or on elaborate embroidery works inspired to the traditional costumes of the Arctic countries. From the beginning he was used to neutral and powder colors but he made several exceptions especially after the spring summer 2003 collection, in which presented for the first time the Monogram Multicolor handbags series created in collaboration with Takashi Murakami.
Season after season the celebration of the icons and the divas of the Hollywood golden age became one of the main feature of MJ style, taking inspiration from the luxury lingerie with bustier, nightgowns, sexy transparencies and precious layers of lace whose flowers are transformed into three-dimensional appliqué.
In 2004 he launched the men’s line, a researching experiment between the metrosexual dandy and the sporty moo, imagining a mix of the elegance of Rudolf Nureyev, the tennis players suits from the 30s, the printed silk robes and the high tech fabrics. However, his preference for women’s fashion took MJ to declare he didn’t understand menswear, so after only 4 seasons he decided to entrust the men’s line to Paul Helbers (former Martin Margiela studio).
Of course, this transfer of power is not based upon MJ tiredness, actually since 2008 he launched even the pre-fall and resort collection re-introducing everyday items in the new sophisticated Vuitton imagery.
From the mid of the 2000s MJ changed the minimalist style with excessive styling taking inspiration from all the decades of fashion by choosing a different theme for every season: the circus, the 40s, the total black, Balenciaga volumes, lurex, the logo- mania, the French countryside, the colors of Vermeer’s paintings, overlays of contrasting fabrics, Art Deco, Art Nouveau, the orientalism, tribal inspirations, the 80s, Marie Antoinette, Brigitte Bardot, the fetish, the Dior New Look, the avant-garde visions of Miuccia Prada, the 60s, the damier motives and the tapestry micro-pattern.
A great mix that like a crescendo reached its climax this week with the last Louis Vuitton show by Marc Jacobs dedicated to “the showgirl in all of us”. The set was made with the scenic designs used in the last shows, all dyed with black paint as if they were the “ghosts of the past”, symbolizing the end of a fashion era.
There is no time to cry in this hard game called fashion, Marc Jacobs is already going towards a new brighter future, so now our thought has to go immediately to the next Louis Vuitton creative director who has to manage such a bulky and iconic legacy. Good luck!
Alessandro Masetti – The Fashion Commentator
Photo credits: Pinterest; style.com