The inspirations for a fashion collection are the fruit of a perennial tension between past, present and future which inevitably involve other disciplines including art and design, and is just following a common passion for the latter, that Marta Saletti and Simona Cassai have launched their jewelery brand LedaOtto in January 2010. 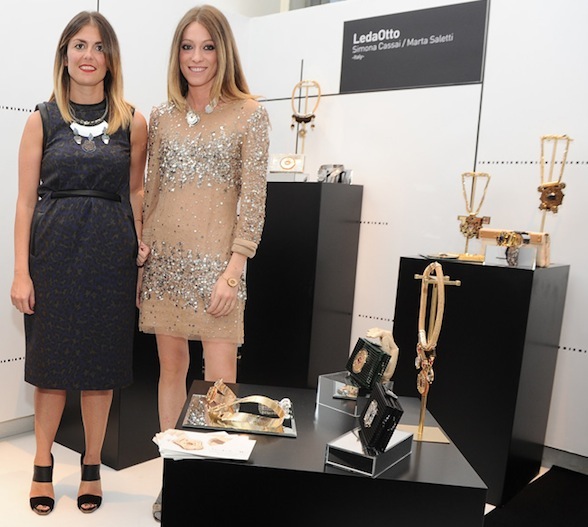 Those who follow my blog know well my fondness for the Tuscan duo LedaOtto. They make “architectural jewels” in Arezzo (the city of gold) with 24kt gold, rhodium or ruthenium plated brass and semiprecious stones, redesigning the plans of the most important buildings of history. Their collections re-trace the human history by reinterpreting iconic monuments, trying to convey the harmony of the architectural proportions into jewelry, so you can find objects resembling the Basilica of San Vitale in Ravenna, the St. Basil’s Cathedral in Moscow, St. Peter’s Basilica at the Vatican, the Pentagon of Washington, the Indian Taj Mahal and the Pantheon in Rome.
As you may know, I’ve seen the Spring Summer 2013 collection in Milan for the Vogue Talents exhibition at Palazzo Morando in September, and there were two pieces in particular that bewitched me: the Arena of Verona made in rose gold plated brass, studded with red Swarovski crystals; and the Farnese line, that reproduces the pentagonal shape of the Palazzo Farnese in Caprarola made in the XVI century by the architect Vignola.
The two designers do not like to be fossilized in the past and for the winter 2013/2014 collection decided to pay homage to the contemporary architecture, creating lines inpired by the most futuristic buildings such as:

The Lotus Temple in New Delhi, made in 1986 and became famous for its lotus flower shape;

the Burj Khalifa in Dubai opened in 2010, with its 828 m high and 160 floors, is the tallest skyscraper in the world, a symbol of the UAE opulence;
and finally the 30 St Mary Axe in London, with “just” 180 meters high, designed by Sir. Norman Foster and renamed by the columns of The Guardian as “The Gherkin” due to its particular shape.
Even if these precious high-tech jewels draw inspiration from the past or the present, LedaOtto inevitably look to the future, but always enhancing the Italian gold craftsman tradition, the greatest added value of the “made in Italy” products.
Alessandro Masetti – The Fashion Commentator