The Milan Design Week 2013 tour by The Fashion Commentator continues with several selected events of the Fuori Salone scheduled for April 9.

The Donatella Chair – The Haas Brothers for VERSACE HOME
The Haas Brothers design studio meets the extreme luxury of Versace giving birth to The Donatella Chair: a futuristic throne made of golden honeycomb and black leather, truly inspired to the rock-glamourous style of Donatella Versace. Strong design characterized by fluid lines, in sharp contrast with the typical neo-classical or neo-pop pieces of the Versace Home brand. With this chair the two brothers Nikolai and Simon Haas show their intent of revolutionizing the concept of classic luxury. 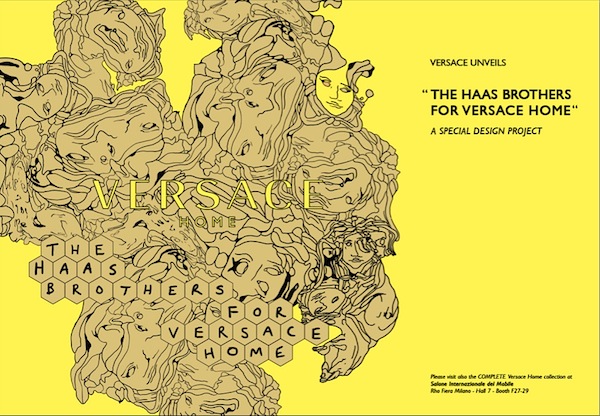 Versace Home
Via Gesù, 12 – Milano
Open to the public only on April 9th from 10,00am to 7,00pm
Cocktail (by invitation): 9th April – 7,00 pm
Aperto al pubblico il 9 aprile dalle 9,00 alle 19,00
Cocktail (su invito): 9 aprile 19,00
________________
The Wool Lab Interiors event by The Woolmark Company and Wallpaper* Magazine
The Woolmark Company, an international authority in the world of wool, presents The Wool Lab Interiors, a guide to the best applications of wool fabrics for interior design. A trend book of inspiration for designers, architects and professionals to get in touch with the suppliers. For the launch of the guide, The Woolmark Company, in collaboration with Wallpaper * Magazine, has created a special set with a series of installations made by seven international designers (Snarkitecture, Simon Heijdens; Jahara Studio; Emiliano Godovy; Esrawe Studio, Studio Adam Goodrum; Hassel) who interpret the themes proposed in the pages of The Wool Lab Interiors. 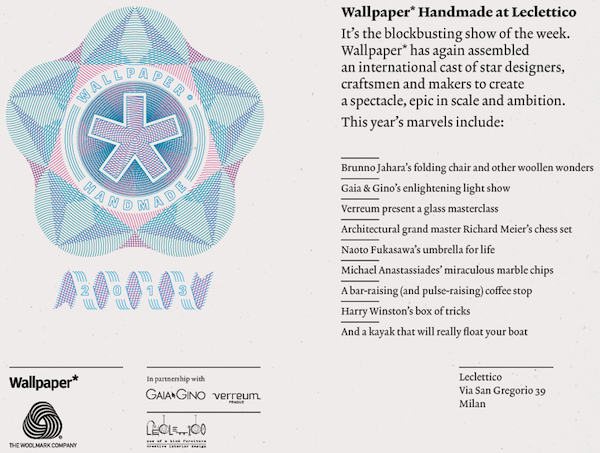 Leclettico
Via San Gregorio,39 – Milano
When: from 9th to 13th April
Hours: 10,00am/7,00pm
Durata esposizione: dal 9 al 13 aprile 2013
Orario: 10,00/19,00
________________
Gae Aulenti, Gli oggetti e gli spazi
Triennale Design Museum dedicates an exhibition to the recently deceased architect Gae Aulenti through a selection of her most iconic design objects made from 1962 to 2008. The exhibition, curated by Vanni Pasca and studio Gae Aulenti Associated Architectsis, presents the design evolution of Gae Aulenti, who was able to look to rationalism and to good design by re-inventing the Neoliberty and Art Deco elegance or catching up with irony with the practice of assemblage and the lesson of the avant-garde. 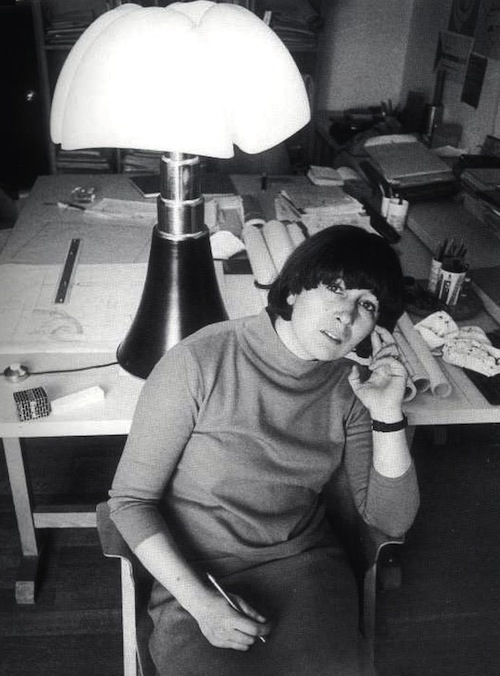 Triennale Design Museum
Viale Alemagna, 6 – Milano
When: from 9th April to 8th September
Special Hours from 9th to 14th April: 10,30am/10,00pm
Durata mostra: dal 9 aprile all’8 settembre 2013
Orario speciale dal 9 al 14 Aprile: 10,30/22,00
________________
Passavamo sulla terra leggeri, tra tappeti e pareti
The imaginary enchanted world of Antonio Marras becomes reality at the Circolo Marras with a special presentation of wallpaper and hand-embroidered carpets based on the original designs of the famous Sardinian fashion designer. An interesting opportunity to appreciate the genius of this “outsider fashion designer” recognizable in the international fashion scenery thanks to his unmistakable timeless romantic style inspired by his homeland, Sardinia. 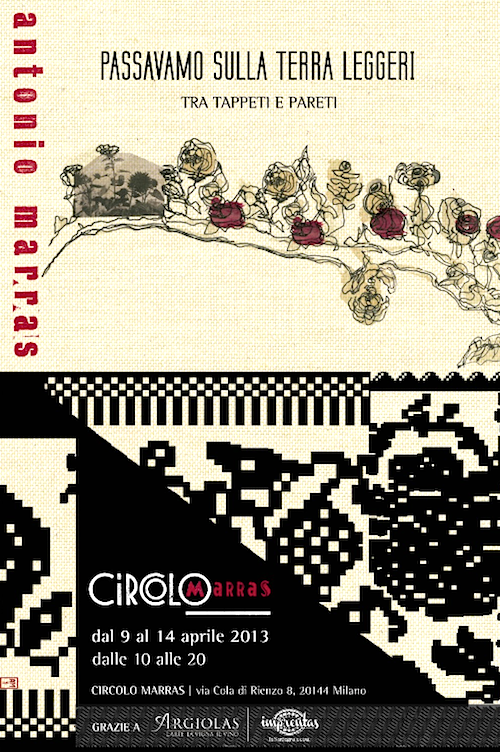 Circolo Marras
Via Cola di Rienzo, 8 – Milano
Opening (by invitation): 9th April – 7,30pm
When: from 9th to 14 April
Orario: 10,00am/8,00pm
Opening (su invito): 9 aprile – ore:19,30
Durata mostra: dal 9 al 14 aprile
Orario: 10,00/20,00
________________
‘S Max Mara – Here is The Cube – Fall Winter 2013 preview
The Max Mara boutique in Corso Vittorio Emanuele presents The Cube Fall Winter 2013 collection preview. The Cube collection, since its appearance in 2008, represents the power of the researching philosophy which characterizes the Max Mara Group. The collection is mainly focused on the down-jacket and thanls to its always new important changes from season to season, both in design and in the selection of high-tech fabrics, has obtained a prominent place in specialized museums such as the Staatliche Museen of Berlin or the FIT in New York, where the Cube is now exhibited as a “cult object”. 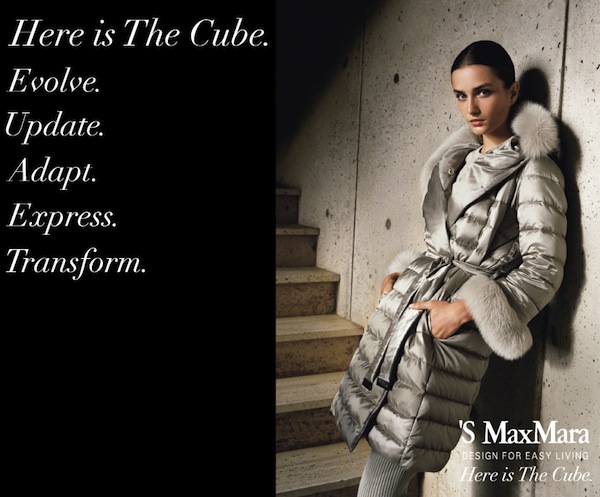