On April 27, I attended the Italian preview of The Hunger Games, science fiction movie based on the homonym literary trilogy by Suzanne Collins, set in the nation of Panem, in an unidentified future age in which is in force a totalitarian regime. Panem is made up of the rich and luxurious Capitol City, and its twelve poor districts. Every year, as punishment for an attempted rebellion of the districts to the power of Capitol City and to show that even a child can’t be considered superior to the governors, 12 boys and 12 girls aged between 12 and 18 are drawn to participate to the Hunger Games. The Hunger Games are a TV event in which the participants, called “tributes”, must fight to death. Only one of them will be the winner and will bring fame and wealth to the provenance district. The story is focused on the character of Katniss Everdeen, a girl from the Miners district, who volunteers to participate to the 74th edition of the Hunger Games. The film is not a masterpiece, and despite the interesting cast made up of (more or less) known actors, it can be defined just as another American blockbuster trilogy with lots of special effects, poor photography and uninvolving adaptation of the script, but the locations and the costumes are enough to strike the audience. 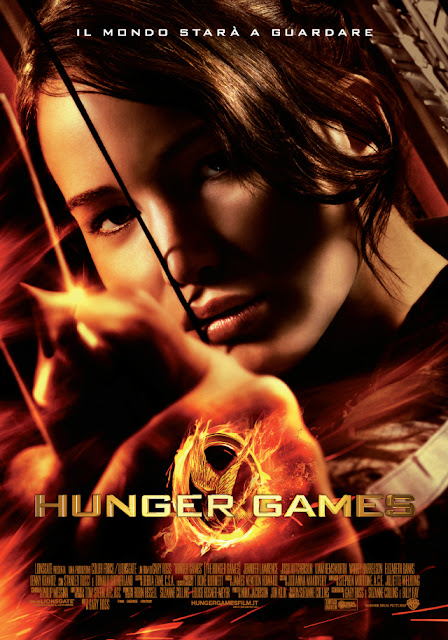 Capitol City seems to be inspired by the futuristic city of the German silent film masterpiece “Metropolis” by Fritz Lang (1927). The austere architectural style of the buildings re-propose the typical features of the “fascist” architecture, which declined the classical Roman forms and materials according to the theories of the International Style, without sacrificing the beauty to the utility. Unlike the architectures of other European totalitarian regimes, only in Italy there was an interest in the beauty of decorative art, with statues, bas-reliefs and mosaics, which express a particular interest for the ancient Roman World. The central square of Capitol City is nothing but the reproduction of the Circus Maximus or the Foro Italico (former Foro Mussolini), as well as panoramic shots seem a sort of collage of the Italian historic city centers rebuilt during the Fascist period.

Unlike what you may think, the Arena where the tributes play the Hunger Games is not a Coliseum, but a “wild” land with traps and genetically modified animals artificially created by the directors of the games, led by a specially management center and monitored with cameras, to give excitement and emotions to the audience at the right time. The Greek myth of Theseus (seven Athenian boys and seven girls were to be sacrificed in the Cretan labyrinth of the Minotaur) meets the Big Brother, which spyes, controls and guides every actions of the participants according to the audience’s will.

The costumes are another key to the reading of the film: fashion and appearance seem to be one of the main factors of this dystopian future, and it’s almost strange to see that the clothes of the Capitol City inhabitants are not science fiction suits, but high fashion dresses.

The costume designer Judianna Makovsky, in an interview with Vogue America, revealed that she didn’t want any reference to the science-fiction costumes: – A suit’s been around for over 100 years; what makes us think it’s not going to be there for another 100 years? 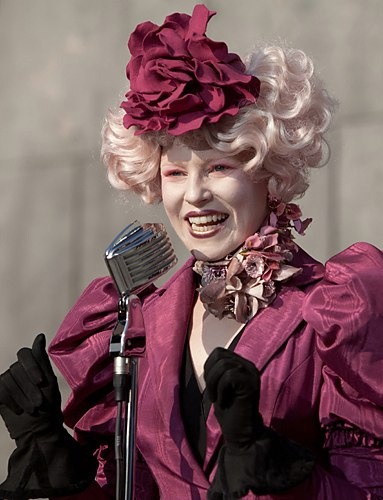 The citizens of Capitol City wear clothes that combine the aesthetics of 30’s and 40’s with the extreme oddities of the nineteenth century, such as voluminous shoulders, excessive ruching, and theatrical hats. – These are people who like to watch children beat each other to death in an arena…I just thought it would be funny if these people, who have such a vicious streak in them, are sort of covered in flowers and ruffles.

Makovsky insisted that the people of the Capitol has to be powdered and eyebrowless, to make them spectral and fascinating at the same time. The heavy make-up is like a mask to conceal the sadism of the society. 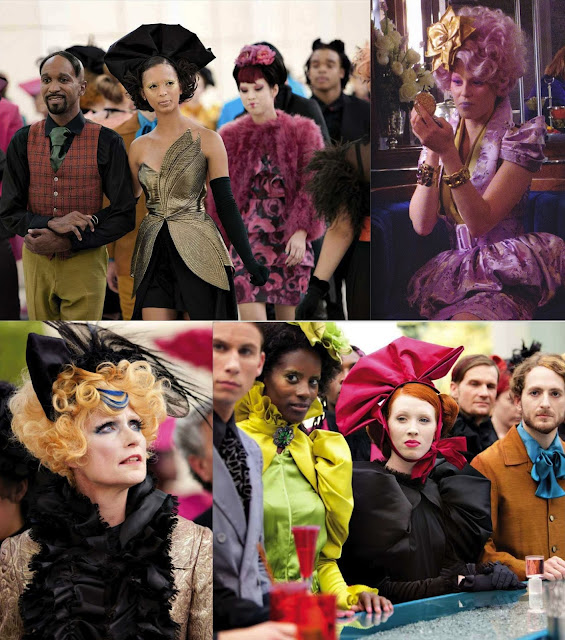 Looking at Miss Effie Trinket (Elizabeth Banks), an advocate of the district which Katniss Everdeen comes from, you have the impression to re-view the Dior Haute Couture creations by Galliano (Fall Winter 2009, Spring Summer 2011) with tight silhouettes contrasting with voluminous sleeves and huge shoulder pads. The outfits seem to be completed with Gucci (Fall Winter 2011) flowered stoles and fascinators from the nineteenth century.

The men’s wardrobe seems to be inspired by the new Prada Fall Winter 2012 collection dedicated to the “dress code” of the power. A Totalitarian aesthetics made ​​of coats with astrakhan lapels, elegant layerings of double-breasted jackets, vests and shirts with military decorations, all declined in the shades of blue and burgundy.

Once in town, even the tributes are assigned to their personal stylists who will make clothes for the social occasions, aiming to gain the consent of the public. The most important event is the Tributes Parade, held in the great square-circus on board of Roman chariots, wearing the symbols of the provenance district. Katniss Everdeen and her partner Peeta Mellark, from the district of miners, are able to focus the attention of the crowd thanks to their fire costumes.

Many fans of the book, despite the effect of colors and shapes, were disappointed by Makovsky’s stylistic choices because she didn’t respect the descriptions in the novel. In an interview with MTV.com she said that she wanted to give a personal interpretation in line with the spirit of the story, but always with the approval of the author, Suzanne Collins.

As already said, The Hunger Games is certainly not a masterpiece of cinema history, but it spurs the audience on reflections, sometimes serious, sometimes banal, on the values of our society.